What to do in Dallas Tx – A 3 Day Itinerary

What is there to do in Dallas? Plenty!

Our recent trip to Dallas was for the most atypical of reasons; a trip to the Cotton Bowl, to watch ice hockey. The Dallas Stars played host to the Nashville Predators for the NHL’s annual “Winter Classic”. On New Year’s day 85,000 hockey fans descended on the storied football stadium, to take in the match. Our son’s junior hockey team actually played the following day in the Cotton Bowl, which was our primary motivation for the visit (No offense to the Stars & Predators!). While we’d been to Dallas for business reasons, years ago, we’d never really “done Dallas.” Fortunately, we found plenty to keep us entertained, during our stay!

First, apologies to Dallas upfront: The beautiful parks, museums, hip neighborhoods, art, & dining options (foodie mecca!) weren’t  what we’d imagined. I’m not really sure what my expectations were, but we could have easily explored greater Dallas for 3 MORE days!

3 day itinerary for the “BIG D” 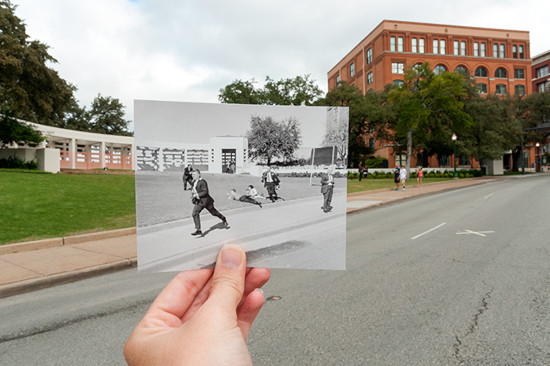 Dealey Plaza, designated a national historic landmark in 1993 and the Texas School Book Depository (Home to the Sixth Floor Museum) are the scene of the assasination of JFK. This tragic moment in US history is memorialized with monuments on Dealey Plaza and the Sixth Floor Museum. The infamous sixth floor room & window, where Lee Harvey Oswald fired on the President’s motorcade, is much as it was on that day. The detailed  tour (audio app available) walks you through the assasination timeline, the 60’s & JFK’s legacy. Everything from the Warren commission, conspiracy theories to the grassy knoll is addressed. $18 for Adults, plan on 90 minutes. 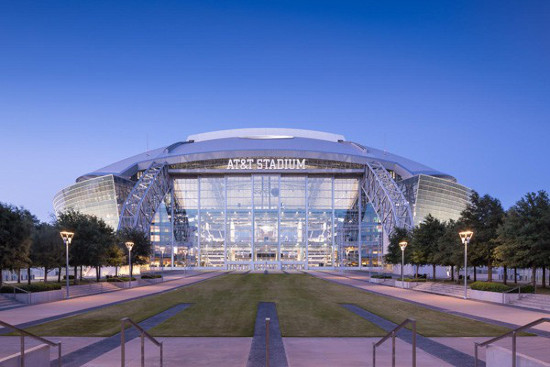 Known as the “Palace in Dallas” AT&T Stadium in Arlington, Tx  is a sports & architectural marvel. The largest domed structure in the world offers VIP guided tours ($32), self guided tours ($22) or the Art tour ($26)… yep, there’s a museum’s worth of contemporary art on display, within the stadium.

The VIP guided tour includes a visit to a private suite, the media press box, the Cotton Bowl Office vestibule, and the Ford Motor Company Fountain. After you’ve seen these areas, your guide will take you down to the event level where you’ll see all of the stops on the Self-Guided Tour, including the field, the Miller Lite Club, the postgame interview room and both the Dallas Cowboys and Dallas Cowboys Cheerleaders locker rooms. It certainly helps to be a sports fan, but almost anyone can appreciate the grandeur of the home Jerry Jones built for the Cowboys. Plan on about 90 minutes to take the tour. 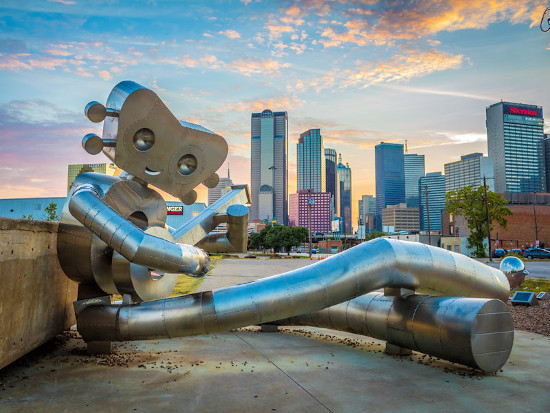 Who knew there were hipster neighborhoods in Dallas?? The Deep Ellum entertainment district, about 1.5 mile from downtown, is laden with cool street murals, funky art galleries and 30 plus venues for indie and blues music. Breweries, cocktail bars, Tex-Mex eateries & interesting shops are plentiful. Need a new tattoo, a music fix or the perfect craft cocktail? Deep Ellum might be the place for you.

Grab a snack at Tiki Loco

As our trip was going to be sort of “meat centric”, we stopped in to Tiki Loco in Deep Ellum for a quick snack. Tiki Loco features coffee, smoothies, shave ices, fresh pressed juice, and vegan tacos. The Nutty Nana smoothie & a Citrus “Chicken” taco hit the spot!

Of the many assumptions we had concerning Dallas, mad BBQ skills was near the top of the list.  The Pecan Lodge in Deep Ellum confirmed it. Mouth watering Ribs, Smoked mesquite Brisket, home made sausages… tender, juicy, smokey.  One of their specials, “The Hot Mess” is a subtle mix of smokey, salty & sweet (Jumbo sea salt-crusted sweet potato, South Texas barbacoa,, chipotle cream, cheese, butter, green onions). Compliment the exceptional BBQ with the homemade Peach cobbler or tumbleweed cookies. Get there early. The lines can be  long and when they run out, they run out! Grab seats at the bar if you can. The full menu is available.

Brunch at the Porch Restaurant

The warm, bustling Porch restaurant is an ideal spot for weekend brunch (book in advance). The smoked salmon and avocado toast & Chilaquiles Rojos are two tasty brunch options. Had we not been in tourist mode, we could have easily hunkered down to a few bloody mary’s and enjoyed the atmosphere. The Porch lunch and dinner menu also look inspired, if your schedule works. The Porch is also very close to the Katy Trail, for a little post-brunch walk. 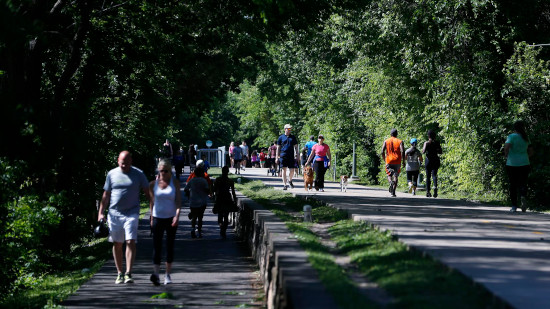 Formerly an abandoned railroad track, the Katy Trail is a 3.5 mile hiking, walking, biking path that runs from the west end of Dallas uptown, all the way to the edge of the SMU campus. There are several restaurants, parks and bathrooms along the trail. A great way to walk off a great brunch (or perhaps find a great watering hole, meal in route). The Katy Trail Ice House is an outdoor beer garden, sporting bar style food & 50 beer taps, should you work up a thirst! 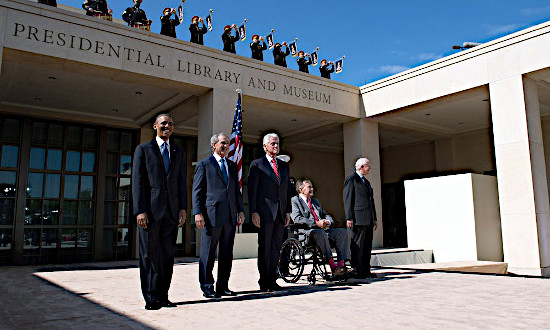 Located on the SMU main campus (25 min from downtown Dallas), The George Bush Presidential Library is a fascinating look at President Bush’s 8 years in office. Including a moving look back at 9-11, a full scale recreation of the Oval office and a closer look at many of the initiatives Bush took on behalf of immigration policy & the environment (with 9-11 overshadowing his Presidency, I’d forgotten what else was on the agenda). 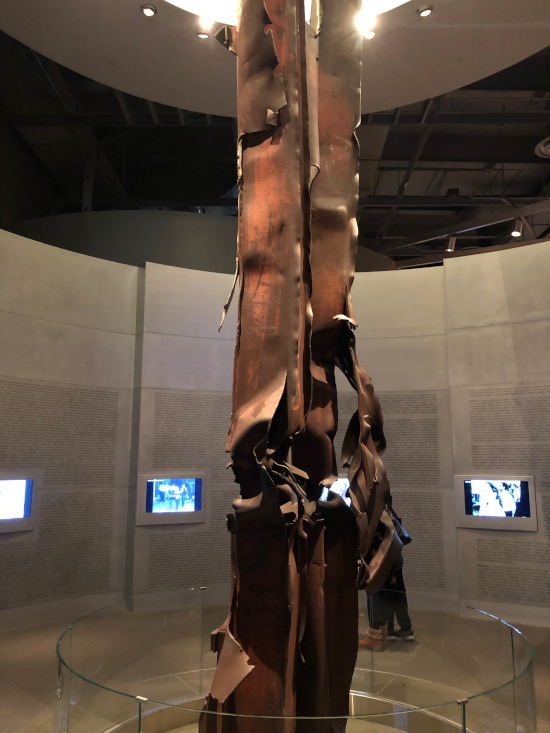 There’s also an interactive exhibit called “Decision Points” which allows you to decide what you would do regarding entering into war with Iraq, given the information available at the time. It did confirm for me that I have no interest in assuming the day to day responsibilities of POTUS! Give yourself at least 1.5 hours to enjoy the exhibits. $9 Adult admission.

Take a ride on the Free M-line Trolley

Once in a while, it’s nice to just sit and watch the scenery go by. Hop on the free M-line trolley that circumnavigates the Uptown, Downtown and Klyde Warren Park areas in Dallas. The old school trolleys, 4.6 miles of track and 40 stops make it an ideal way to site see, hop off when something interests you, then hop back on 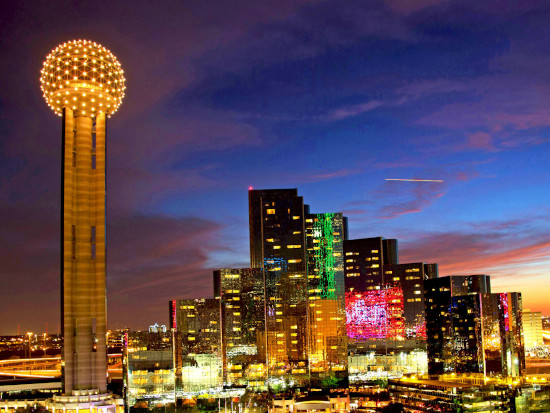 Standing at 560 feet, you can’t miss the glowing Reunion Tower, in the downtown. Combine the best panoramic views (floor to ceiling glass) of the city with cocktails and dinner. For casual fair, head to the Cloud Nine Restaurant or, for a more upscale experience, try Wolfgang Puck’s Five Sixty Dallas. The Pan Asian fair at Five Sixty gets great reviews! 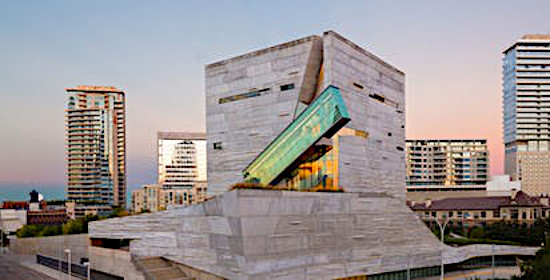 The 180,000 square foot Perot Nature & Science museum was opened in 2012. This highly interactive museum has something for everybody to explore (young and old alike). The spectacular building itself is an exhibit (sign up for the architectural tour). The permanent exhibits such as the Gems & Minerals Hall, Life Then and Now & Lamar Hunt’s Sports Hall are all worthy of exploration. Special temporary exhibits are pass through the Perot museum as well. Currently, Origins, Fossils from the cradle of humanity & Nature’s Art – The Mineral Beauty of China are on display. $17 for Adults

near the Perot Museum and the Arts district 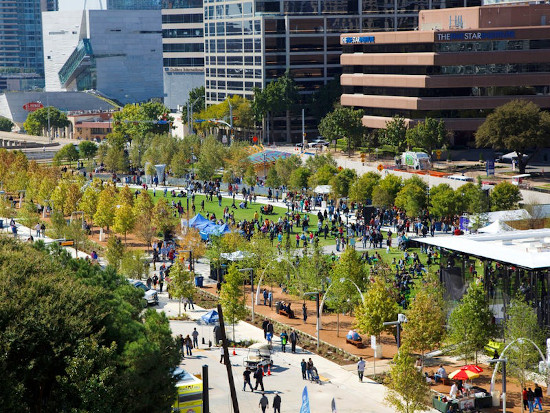 About 3 miles from downtown, the Bishop Arts District is home to 60+ independent boutiques, bars, restaurants & art galleries. Stop into the Tribal All Day or Espumoso Latin cafe, grab a coffee or cold pressed juice and start shopping. There’s a wide variety of shops worthy of exploration. Stop by:  Harkensback lifestyle and clothing store for a seventies vibe, M’Antiques, for classic tools, furniture, painted toys and soldiers or Strut, for more contemporary clothing & style, to name a few. Unique food options are abundant.

A drink, snack, book or a play? 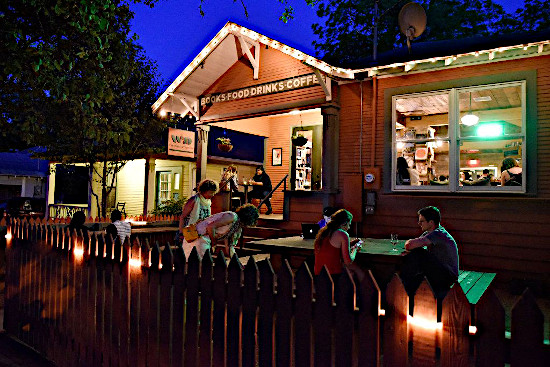 The Wild Detectives is combination Book Store & Bar based on the concept of people hanging out, opening up and socializing. Pure Genius!  Wild Detectives hosts several events a month, including story telling, music, poetry readings and plays. This month features the “Shakespeare in the Bar’s Winter’s Tale” Drop in for the casual but tasty food, buy a book, or catch one of the many events. Tickets & event info available online.

Dinner at Hutchins BBQ in Frisco 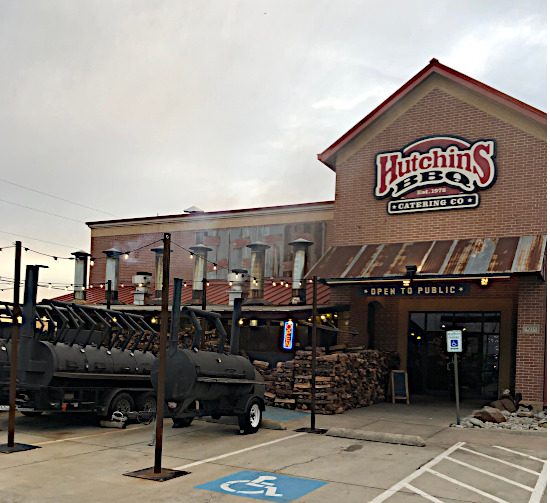 Admittedly, we’d already experienced great BBQ at the Pecan Lodge, but, when in Rome. 🙂 Actually, our son had another game in Frisco, Tx and Hutchins BBQ had great reviews. Hutchins is a family oriented, neighborhood BBQ place. Serving only soft drinks and water, the focus here is on the BBQ… and it did not disappoint! Outstanding smoked meats and all the fixings. I’m going to have to lay off the meat after the trip, but it was so worth it!

The ones that got away!

Time being what it is, there are lots of places we will have to save for the next visit:

The State Fair of Texas 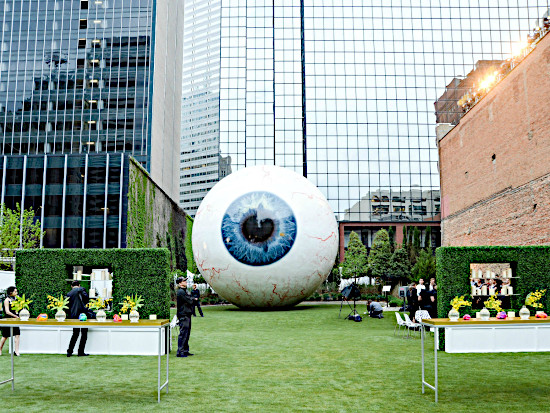